Known for her warm characters and interactive invention, Bridget Marzo  is the award-winning artist-author of well over 20 picture books.   (You can find more of her previous books, along with more  illustrations and interviews in her  Bridget Strevens Marzo archive site)

Bridget believes in the power of pens, pencils, paints – and picture books – to open our minds at any age.

She works between France and the UK for publishers in different countries.  Even when we don’t speak the same language, what matters is what we all share in common.  That is what she learnt as a child thanks to her English, French and Catalan family. That, and how we all grow together, is also what Bridget’s  latest book is about.  It is called YOU, ME and OUR WHOLE WIDE WORLD.  Here is the cover. 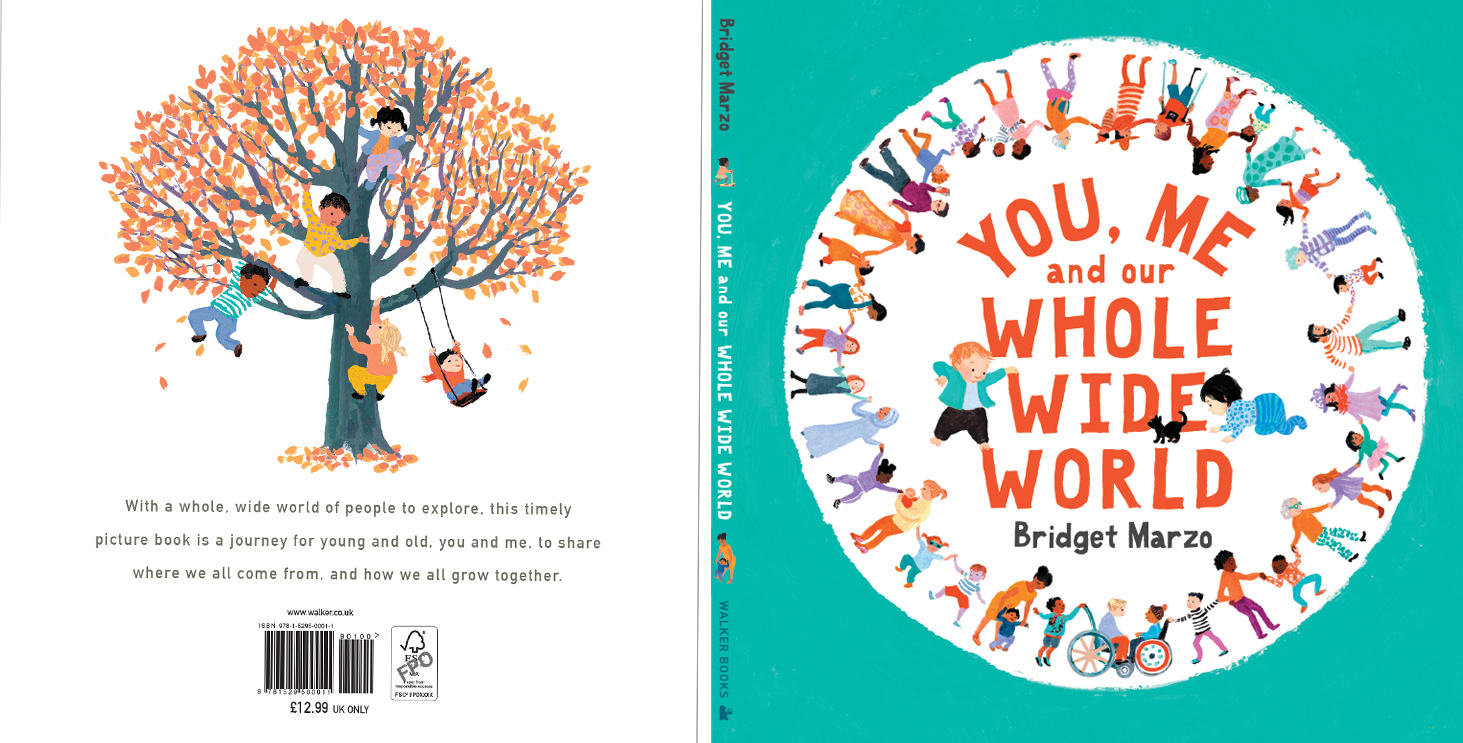 Bridget’s latest book is out with Walker Books UK

The hardback is out now with the wonderful publishers Walker Books and the paperback is due in early Spring 2023.

Bridget loves giving creative story making and colour and character making workshops for schools, libraries, and festivals across the world, including at the Beijing BookWorm festival,  where she got nearly 1000 children and teachers all drawing characters together for their own stories.

Right now in 2022  Bridget is busy painting the illustrations for Mo’s Best Friend, a Stone Age Story.  It is one of several stories she has been working for a while, that are set in a world before anyone wrote stories down.  Publication takes time so you’ll have to wait until late 2023 to see the cover of that book.
Would you like an author-illustrator visit to your school, bookshop, museum or festival event in the UK, France…or online?
If so, please visit  Events Page for more details of Bridget’s workshops and bookings.
She is happy to work with children, or adults or families together.
instagram @ bridgimage_art
twitter  @bridgimage 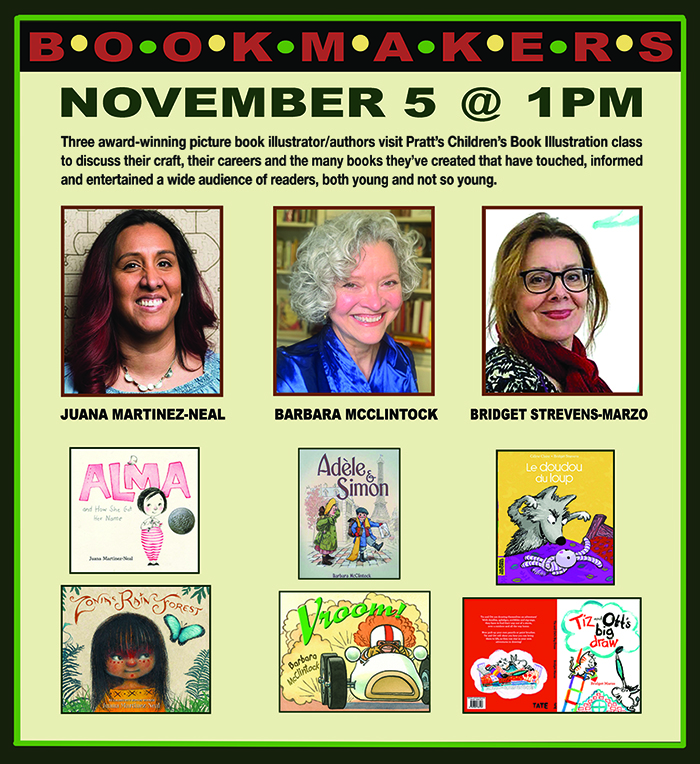 Bridget was proud to be one of 45 illustrators led by Axel Scheffler contributing visions of Europe in the book DRAWING EUROPE TOGETHER (Macmillan November 2018), and in an exhibition that toured around the UK and Ireland including  at the Royal West of England Academy . 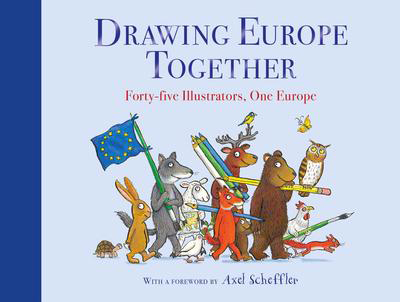 Europe in a Tree ©Bridget Marzo, gouache on tinted paper in Drawing Europe Together, Forty-five Illustrators, One Europe published by Macmillan November 2018 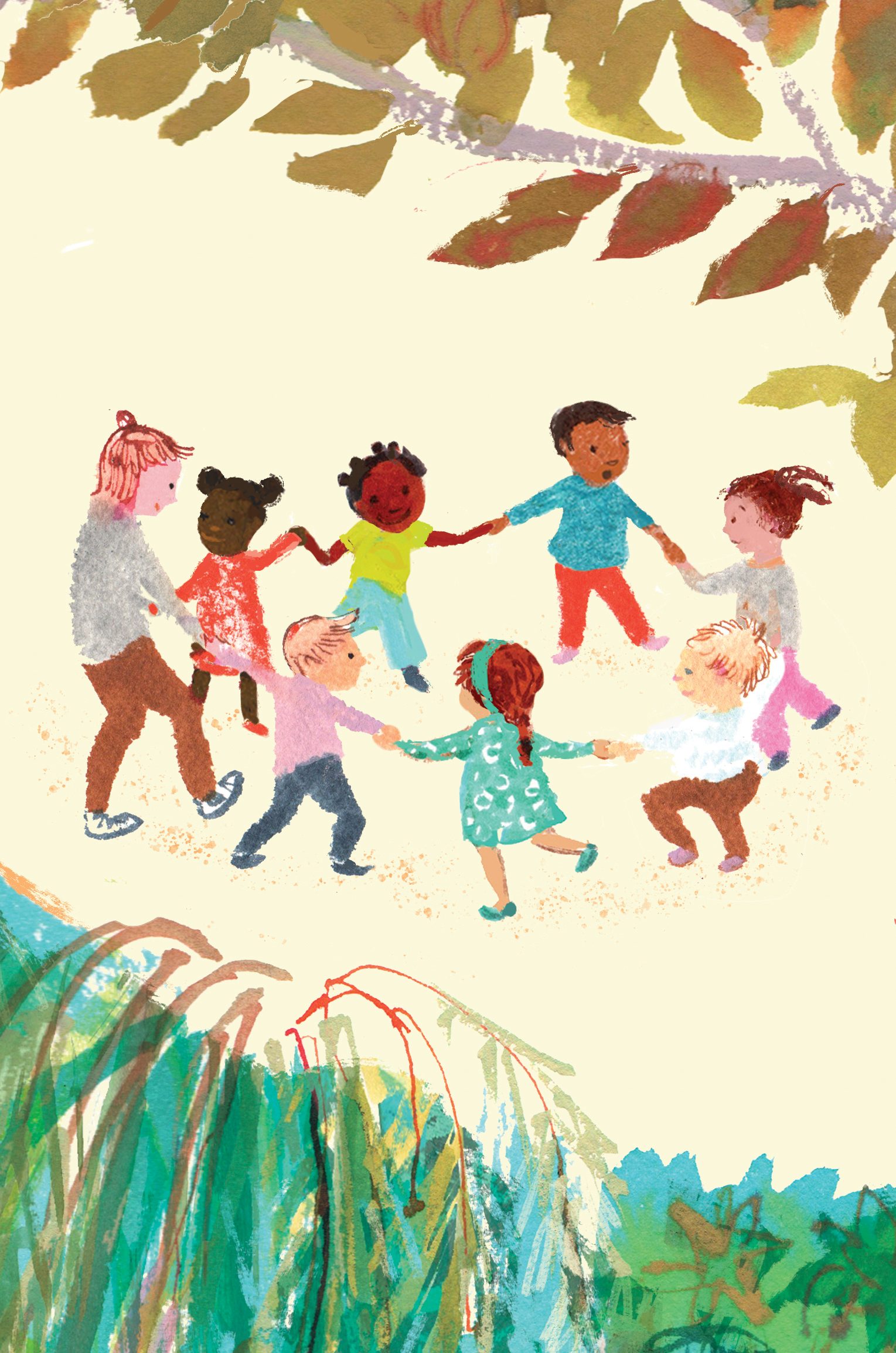 November 23, 2019   Joined Axel Scheffler and the rest of a fab crew at South Ken Kids Festival illustrators from both sides of the Channel in this year’s drawing to music  Impro! 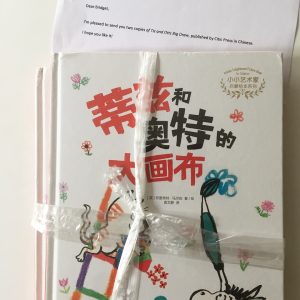 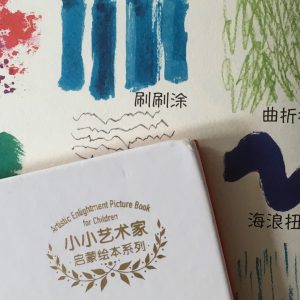 On it is a beautiful gold stamp with the words ‘Artistic Enlightenment Picture Book for Children’. 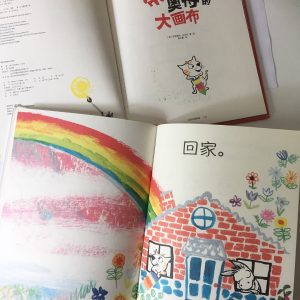 Above is the Chinese character for HOME, the last line of the story.

Here’s Bridget in action with Tiz and Ott and a crowd of children and families in Tate Britain. Look at the lovely art works the children made  – in less than an hour – in the great London art gallery!

I adapted 4 well known fairy stories in my latest French books  Les Contes à Colorier  (my “Draw Along Tales“)  so that children use their pencils and crayons to help the characters along their way – as well as colour them in.  Published by Bayard Jeunesse. 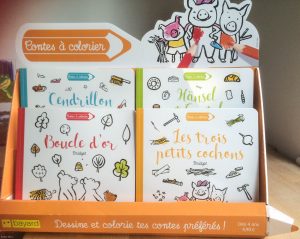 The  bookstore display case for my 4 Contes a Colorier out with Bayard, France

Meanwhile,  the high-energy scribbler  Tiz the cat,  and slow and steady Ott the donkey who paints, have been keeping Bridget  busy since Tiz and Ott’s Big Draw was published with the Tate UK and distributed by Abrams in the US.

Here’s Tiz  being useful – as a 3-D pencil holder!  Big thanks to the fab designer Evavooo who loved my book character and created Tiz in 3-D!  If you have access to a 3-D printer you can download the 3D  template  and make and paint a Tiz  of your very own – for free! 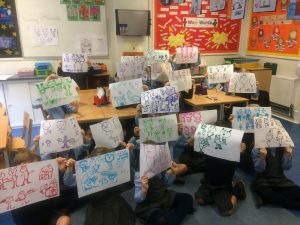 So many friends for Tiz and Ott to play with! Here is a roomful of characters drawn by 5  year olds at one of Bridget’s South Ken Kids Festival school visits 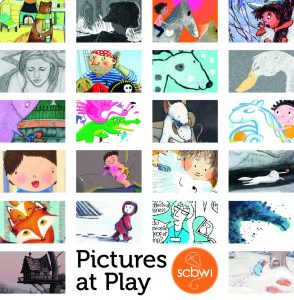 A juried exhibition of children’s author-illustrators including guests  Leigh Hodgkinson, Tim Hopgood and Pam Smy,  in PICTURES AT PLAY, the very first grand biennial illustration exhibition by the Society of Children’s Book Writers and Illustrators, British Isles, at the Half Moon Gallery, London.

The South Ken Kids Festival  2016 started with a tribute by Quentin Blake to his French connections in art and music.  Bridget drew live on stage  with the great artist-author Serge Bloch 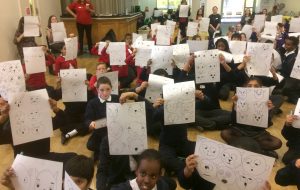 In a  30 minute illustration plenary at CWISL’s ShoutWest Festival, Bridget showed children ages 9 – 12 how to relate characters to each other – with the simplest of means. 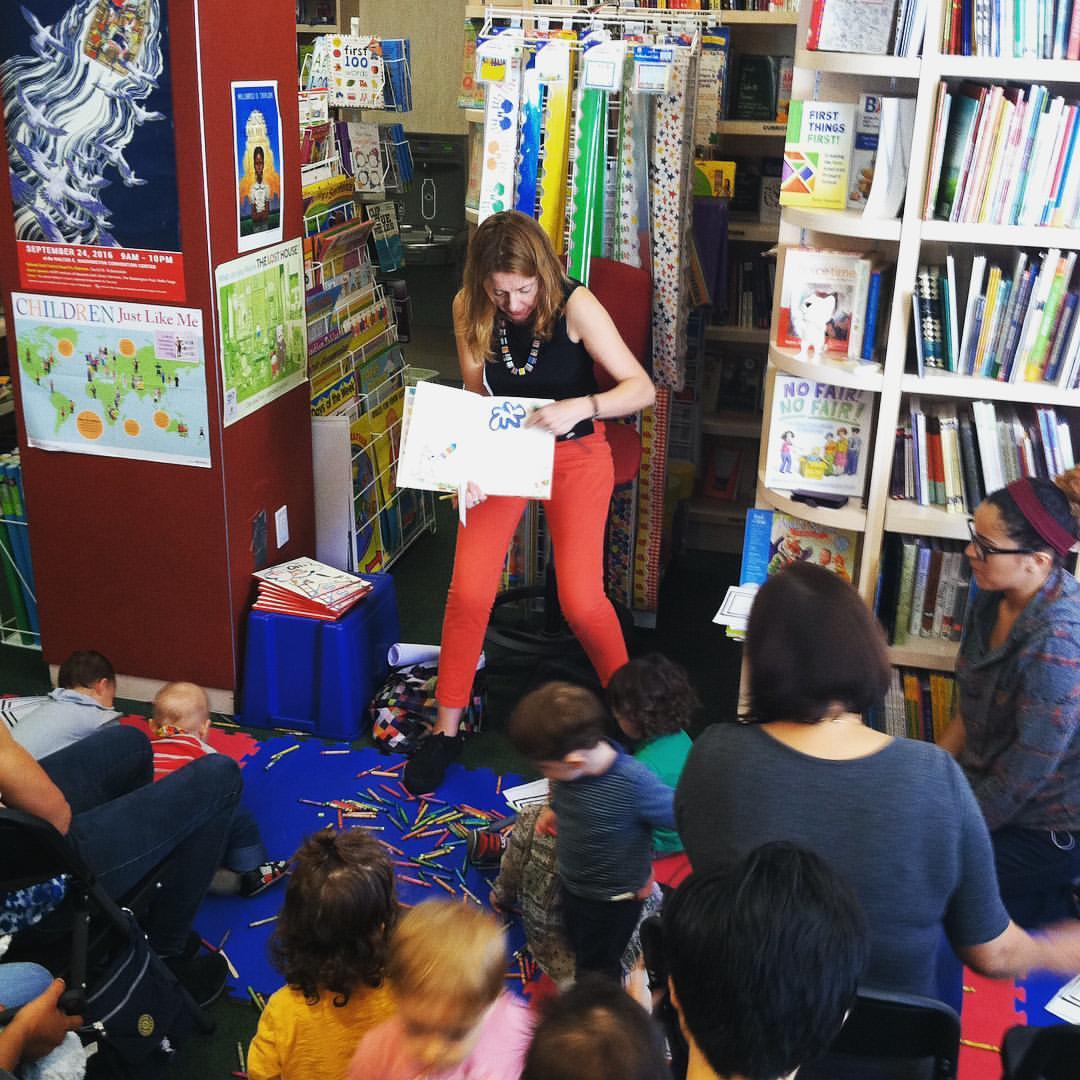 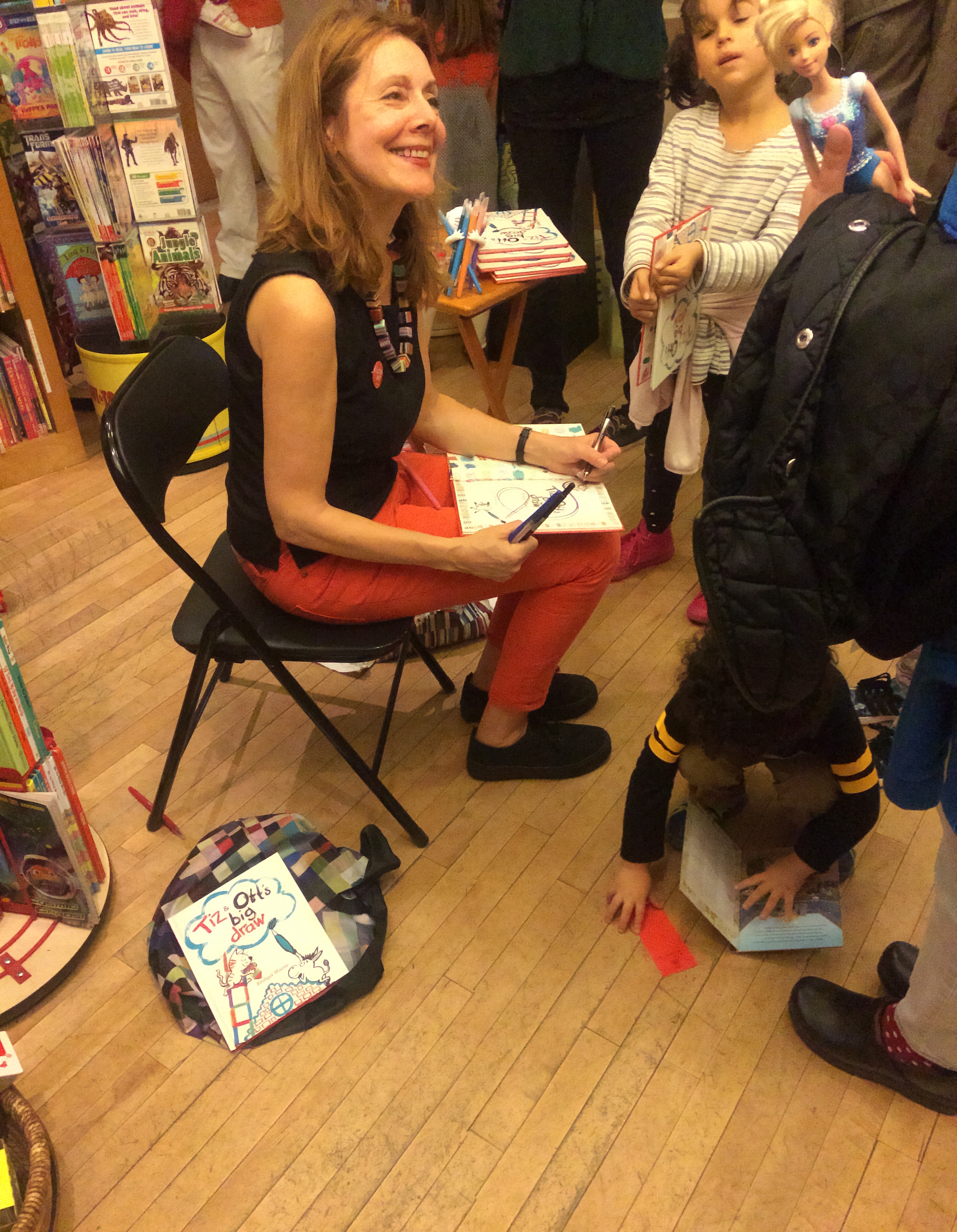 Bethlem Museum of the Mind, London

A family painting workshop inspired by a fascinating book on show in their current exhibition  Youtopia, called the Little Traveller.

Here’s a short film of what we did at Tate Britain, Millbank, London SW1P 4R 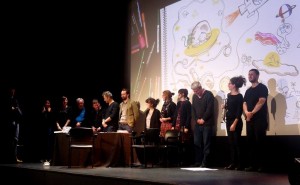 The Isle of Wight Literary Festival

ShoutSouth Festival at the London Southbank university. Check out my blog post about getting over 100 adults and children drawing stories out of characters at Shoutsouth.

China Bookworm Festival.  talks and workshops for children and adults in Beijing and Suzhou.

The World of Kids Lit with Frané Lessac and  Anette Øster.

Masterclasses for the SCBWI at the House of Illustration, London 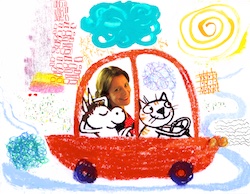 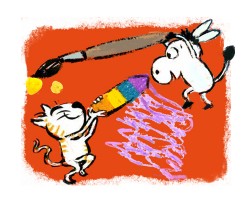 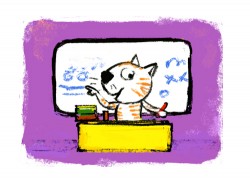 For Galleries and Festivals 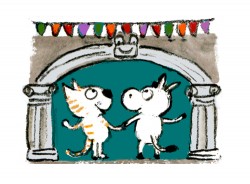